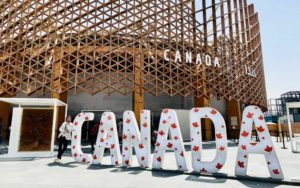 As the first in-person MEMOS session in more than two years just ended in Dubai, I’d like to turn your attention to another event that just took place in Dubai… the world’s greatest show, the 182-day long Expo 2020 Dubai.

I just came back from Dubai after spending seven months in the UAE megalopolis working on the first World Expo to be held in the Middle East and North Africa region, and the largest event ever held in the Arab world, leading and directing the Canada Pavilion communications team on behalf of the Government of Canada, grateful for this other opportunity to represent my country on the world stage. It has been the privilege of a lifetime. 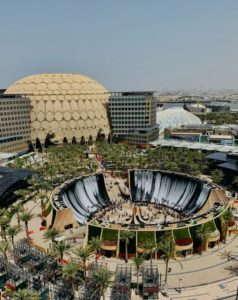 It’s been just over a month since this amazing event ended (the post-Expo period goes by as fast as the Expo itself), a month during which I’ve taken the time to decompress, let the dust and adrenaline settle, and reflect on how far I’ve come since my first day working on this project, on March 1st, 2021. What a year it’s been; what a lot of projects to handle in a few months, having to restart the comms shop after a one year hiatus due to the pandemic, to be ready for the big day on October 1st. To write that holding an international event of six months (a 26-week marathon, the equivalent of 11 back-to-back Olympic Games – with no break in between), gathering 192 countries in a context of a global pandemic will have been in the least bit complicated is what one would call an understatement … holy guacamole! In the category of adaptability, Expo is now at the top of my list of achievements; 182 consecutive days of having to constantly adapt to millions of curveballs; the hallmark of event management. Very grateful for my 5 participations at the Olympic and 2 at the Paralympic Games, the practice was very useful.

MEMOSIANS all know what it means to organize an event attended by all the countries on the planet. In this regard, what a remarkable and incredible job by the organizers for holding this project together despite the health pitfalls, and for doing so much to ensure the safety of thousands of staff and millions of visitors (more than 24). That Expo took place in such a context is almost a miracle. The contrasts between watching the Tokyo and Beijing Games with empty venues while the Expo was hosting thousands of visitors per day, and seeing huge line ups in front of pavilions were striking. I tell them bravo for believing in their vision to the end. To say the least, they nailed it. The largest event ever held in the Arab world fulfilled its promise.

What an extraordinary show they have put on for the countries and the 24 millions of visitors they have welcomed to this site. For me, the amazement was immediate and lasted until the last day: the architecture, the culture, the food, the colors, the flavors. A feast for the eyes. Delivered at the speed of Usain Bolt.

I believe that the Dubai Expo will have a positive influence on the millions of young (and not so young) people who came through its doors, an event that will mark their generation (and the following ones), just as Expo 67 had an influence, back home, on Montreal, Quebec, Canada. The opportunity to have learned something that will define their future and contribute to building a better world.

And it taught me a lot regarding mega events. Lessons that can be applied to the Olympics and Paralympics. Lessons I’d wish to implement by having again an active role in the Movement, after four years working for Canada’s Department of Foreign Affairs.

In a context of global pandemic and geopolitical turbulence, the world needs more events like the World Expo, more relevant than ever; more opportunities to educate oneself, to open up to the world, to discover new technologies and the solutions that countries offer to the challenges that define our contemporaneity.

To go and meet the other, to dialogue with him/her, to discover him/her. To see the difference with the other as a learning opportunity, an occasion to be inspired by one’s culture to improve our own. The world needs more international encounters, not less, where it learns from the other, needs more diplomacy, more messengers of diplomacy.

Through its pavilions, its culinary discoveries, its cultural performances, its discussion forums, its business meetings, Expo is the most impressive manifestation of public and cultural diplomacy that I have ever had the privilege to participate in. And I have witnessed firsthand over the past few months the importance of this diplomacy, of collaboration, of mutual aid, of sharing knowledge between countries. The Te Aratini Festival of Indigenous & Tribal Ideas, organized and led by the New Zealand Pavilion, in collaboration with the pavilions of Australia, Malaysia, Paraguay, the United States, Panama and Canada, tops the list. An event, a movement to elevate the knowledge, skills and aspirations of these peoples globally, fostering a better understanding of their economies and the converging roles of culture, commerce, community and conservation in protection, that included the participation of more than 50 panelists and dozens of performing artists, a first in the context of a world’s fair. 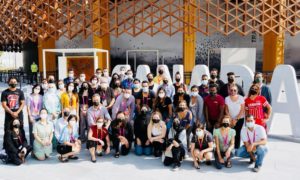 Artists, as well as athletes, are messengers of diplomacy. If artists were plenty at Expo 2020 Dubai, there should have been more athletes present. The next World Expo will be in Osaka in 2025, in the same country that hosted the last summer Games. Here lies an amazing opportunity to embrace Japan’s sport heritage. NOCs and NPCs, I invite you to work with your country to invite Olympians and Paralympians in Osaka. Have these distinguished guests come at your country’s pavilion to meet the Expo’s visitors, host speaking opportunities with them where they can tell their story and inspire kids. Let’s create an equivalent of the Te Aratini Festival with Olympians and Paralympians from all over the world, showcasing collaboration between countries, and addressing various topics; inclusion through sport, women in sport, sustainability in sport, amongst several “social” topics athletes could touch upon. Messengers of diplomacy in action while the world is watching!

As for the artists, if they deserved their fair share of the space at the World Expo, like athletes do, they also deserve a larger share of the space at the Games. Remember the three traditional pillars of Olympism? Sport, art and culture. If there is one host city that will put emphasis on culture and artistic expression at the core of their offering, I’m sure it will be Paris in 2024, France being the ultimate beacon of culture! Cultural collaboration between countries, through music, dance, visual arts … in countries’ hospitality houses, around venues, on the streets, etc.. More messengers of diplomacy in action while the world is watching. I want to see them more in Paris, in Los Angeles, in Melbourne, and will work to see them more. 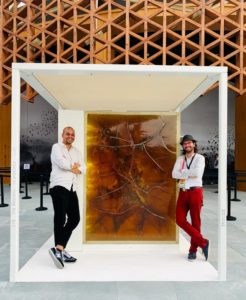 Staffers are also messengers of diplomacy, whether at the Expo or at the Games. What make these events such magical and unmissable platforms are the people who live it, who shape it. The people with whom we live Expos and Games and with whom we will share the memories of our adventures and misadventures in 10-15-20 years. During my MEMOS and my experiences at Games, they came from the US, Turkey, Iran, Brazil, Saudi Arabia, Italy. During Expo 2020, they came from Guinea, Kuwait, Montenegro, Mexico, Poland, New Zealand. Once strangers, they are now close friends. Without them, Expos, Games, MEMOS are nothing.

Just as Expo would not be Expo without my dear colleagues from the Canada Pavilion, with whom I have gone through highs and lows, between joys, laughs, dramas, tears, in a jacket and tie or inside a mascot, dehydrated after an afternoon of working outside at +50 or quenched by drinking a good Leffe Rousse on the terrace of the Belgium Pavilion. They, and the ones of all the 192 country pavilions, can all be proud of the work done in Dubai.

So can I. This was a difficult, complex project from day one. I knew what I was getting into and I jumped in with the same passion I’ve always had. I am extremely proud of the work that was done on the ground for this extraordinary event. Proud to have overcome the obstacles, to have always been in solution mode, to have learned so much, to have witnessed, once again, the importance of public and cultural diplomacy. Proud to have built a great team. Honored to have collaborated with such extraordinary partners; I love them with all my heart! Thanks to all those who will have made Expo 2020 Dubai the privilege of a lifetime.