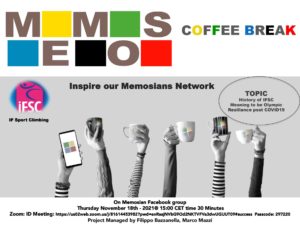 Our November Coffee Break was with the General Director Piero Rebaudengoof the International Sport Climbing Federation.

In the discussion of Climbing being a new Olympic Sport, Rebaudengoof was quick to remind us: “the sport of climbing is old”. Climbing is one of the five movements we learn when we’re children. “We climb before we run”.

This was a great follow-up to our World Skate interview in October (link). The MEMOSIAN community joins the world in anticipating more great events in the future – including Paris 2024.

MEMOSIANS, have an update you want to share with the community or an idea for a MEMOS Coffee Break topic? Email us! Contact@memos.degree