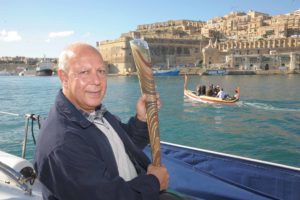 On July 21st, Mr. Joseph Cassar joined host Marco Mazzi with MEMOSIANS on Zoom. We were lucky to learn about his role at The 2022 European Youth Summer Olympic Festival in Banská Bystrica, Slovakia. Mr. Joseph Cassar is the Chairman of the Coordination Commission of the Games.

With the Opening Ceremony on July 24th, Joseph had a lot on his plate but was excited to share with MEMOSIANS. Preparation was on schedule, and we thank him for taking time out for us!

Our first topic with Host Marco and Joseph was the history of the Games. The European Youth Summer Olympic Festival was originally called the “European Youth Olympic Days” and started in 1991 in Bulgaria. By 1993, they expanded to winter and summer Games. The athletes are aged 14-18-year-olds. Currently, they are very proud of having reached equality between male and female athletes as the event follows the IOC as much as possible.

A favorite feature of the Games is their flame, it is specifically the Flame of Peace.

With organizers expecting 3,00-4,000 athletes and team officials, they had a particularly challenging logistics. The war in Ukraine caused many accommodations in Banská Bystrica, Slovakia to be used for refugees. In a city this small (population 78,700), the space for volunteers is particularly limited.

Finally, to cover all stakeholders, Host Marco asked about the sponsors of the event. In 2022, sponsorships for sporting events is a fast-changing environment. Most of the sponsors for The 2022 European Youth Summer Olympic Festival in Banská Bystrica, Slovakia were local companies and organizations.

Joseph, we can see the Games have had a successful start! Congratulations and we look forward to seeing more!

Our next Coffee Break will be in September as Marco and Filippo are taking August off.

The MEMOS Coffee Break is a MEMOSIAN project by Hosts Marco Mazzi and Filippo Bazzanella. Want to be a guest? Email us at contact@memos.degree